As my text work for As You Like It winds down, I’ve now begun more dramaturgical matters, researching the performance history of the play and seeing what insights I can glean from past directors. 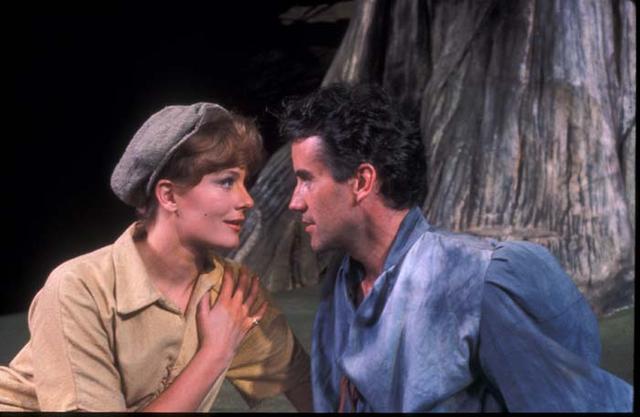 Great performances: Vanessa Redgrave in As You Like It; At Stratford in 1961 the star set a gold standard for the role of Rosalind. Her whole interpretation was about the poleaxing effect of passion
The Guardian (London, England)

Vanessa Redgrave is one of the most thrillingly unpredictable actors. Miscast, as she was as Beatrice in Mark Rylance’s dreadful Much Ado About Nothing at the Old Vic in 2013, she is forced to rely on technique. At her best, she seems to have access to an inspiration unknown to most performers. I put this down to genetics — her father, Michael, had a similar quality — and to a spiritual generosity that manifests itself in her dedication to good causes.

But, if one test of a great actor is the ability to give a performance that becomes a gold-standard for future generations, Vanessa Redgrave did that with her legendary Rosalind in As You Like It at Stratford in 1961.

I’ve never seen — and I realise you have to be a certain age to have caught it — a more exciting demonstration of the ecstasy of love. The moment everyone seized on was when Redgrave, disguised as a boy in a simple smock and pedal-pushers, shed her linen cap and unleashed her tucked-up hair. Critics, mostly male, fell in love on the spot, as typified by JW Lambert’s remark that Redgrave allowed her hair “to tumble like a flock of goldfinches into sunshine”.

But there was more to Redgrave’s Rosalind than striking effects. Her whole performance was about the poleaxing effect of passion. Redgrave’s cry of “excellent young man”, when Rosalind first saw Ian Bannen’s Orlando triumph in a wrestling bout, captured the character’s instant loss of self-possession.

Disguised as Ganymede, Redgrave went on to show both the anxiety and rapture that are part of Rosalind’s nature. When Orlando told Ganymede that he would not be cured of his love, Redgrave was shocked into momentary silence. But later, when she revealed “how many fathom deep” she was in love, Redgrave’s voice acquired what the Shakespearean academic Robert Smallwood called “a sighing cadence”.

It helped, of course, that Redgrave was only 24 at the time and possessed a balletic grace and beauty. But, while it may irk readers to hear about a performance they never saw (though there was a BBC recording of the production), there has been plenty of evidence in later years of Redgrave’s mature greatness. She was superb in Ibsen’s The Lady from the Sea and John Gabriel Borkman, movingly embodied Joan Didion in The Year of Magical Thinking and memorably haughty as the old lady in Driving Miss Daisy.

Redgrave still seems able to channel her access to mystical forces and shows no sign in her seventies of waning powers. But, if I want to recall an image of the abandoned ecstasy of love, it is to the memory of Vanessa Redgrave’s Rosalind that I still turn.

I absolutely love the description of her “reveal”…