So, as part of my due diligence, directing As You Like It, I like to go back and look at some of the past versions of the play that I can find on film or video. 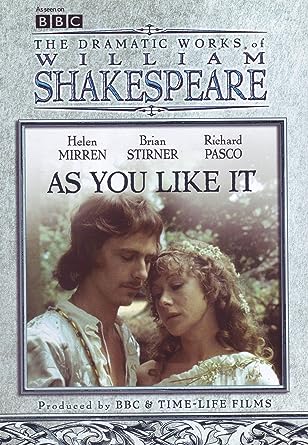 In the late seventies/early eighties, the BBC produced all the plays as part of their Complete Works of Shakespeare series, and their As You Like It was in the inaugural season of 1978. Directed by Basil Coleman, it was notable for its use of location. Instead of shot in a studio, this was shot at Glamis Castle in Scotland. And while that helps with the naturalism of the setting, it also poses some logistical/technical problems–none that are too distracting (the lighting is poor in some scenes, and for the most part the sound mix muddy)–just enough to end location shoots for the rest of the series.

As per the agreement with its financial backers, the entire series is set in the Elizabethan period and done very traditionally, and this film is no different. The costumes in the first act (in Frederick’s court) are opulent and what you’d expect, but once we get to the Forest of Arden, none of the costuming becomes too obvious. In fact, for Rosalind/Ganymede, it works to an advantage. When at court, Rosalind (played here by Helen Mirren) has those, for lack of a better term, dome headphone things over her ears with her hair pulled back and up into the tall conical caps. So when she gets to the woods, and her short hair frames her face, she does look like another person. It also helps that while Mirren is attractive, there’s an almost masculine handsomeness in her features, not a overly feminine beauty.

Mirren’s Rosalind is theatrical, in the early scenes when she talks of “falling in love” she takes on the pose of an actor acting love. So when she takes on the role of Ganymede, it is no surprise that she’s enjoying the masquerade. Angharad Rees’ Celia on the other hand is not the doormat we see in many productions. She’s protective of her father. And her friendship with Rosalind is not idolatry, and more likely to comment on the proceedings. On the other hand, Brian Stirner as Orlando is physical and serviceable if not outstanding.

Richard Pasco’s Jaques, however, does stand out. And I’m not at all sure if that’s a good thing. His melancholy man, seems almost bi-polar (and maybe that’s what Shakespeare was going for, centuries before that clinical diagnosis even existed). Overly excited when talking about meeting the clown, otherwise almost catatonic moroseness. His eyes sunken, baggy, hair disheveled, he is a man moorless. His “seven ages” speech begins with a swagger and decays with the ages. Not sure if it’s that effective, but it was interesting.

There were other nice touches: inclusion of all the songs. A violent Frederick chasing Oliver through the castle. A bawdy/flirty Touchstone/Audrey romance. A fierce Phebe. And really nice chemistry between Orlando and Ganymede.

It was nice. Nothing objectionable. And maybe that’s the problem. Good. Not great. Again, nothing to get too excited about, but worth a watch definitely. You can find a grainy subtitled version on YouTube, as well as both streaming and DVD on Amazon.