So the end of last week was a kind of confluence of King Lear viewing experiences. Last Thursday evening, NT Live had one of its worldwide cinema broadcasts of a performance of the Chichester Festival Theatre production of Lear that had been transferred to London, so that more people could see what Ian McKellen has said will be his last live theater-Shakespeare. Then, the very next day, Amazon Prime released the BBC production of the play with Anthony Hopkins leading a star-studded cast.

So let’s take a gander, shall we?

First up: the NTLive theatrical version with McKellen. Where does one begin?

Well, a better question might be: when will it be over? Oh, you mean it isn’t still running? I mean, I love the play, people, but three hours and forty minutes just seems a bit self-indulgent to me. And given the fact that they DID make cuts to the text, I think it’s safe to categorize it as such.

This is not to say that the production, directed by Jonathan Munby, wasn’t enthralling. It was. But jeez, that’s a long time to have one’s rear in a chair.

McKellen was brilliant, of course, as expected. This is a man you could see beginning the play with the realization that he isn’t the man he used to be, and trying to get out in front of his decay by divesting his power. Only he can’t. His physical frailty only adds to the sense of decline. Very well drawn.

The use of a female Kent, played by Sinead Cusack, was simply a masterstroke. I totally bought her being a vital part of Lear’s ruling party (the play was set present day). And her desire to stay in England to watch over Learn is completely believable, giving Kent an almost maternally protective air. And she’s given a final moment after Lear’s death that is just devastating. She picks up the pistol Lear had used to kill Cordelia’s hangman, and when she walks off to join her “master” you get the real feeling that she’s not just going off to die, but to kill herself.

The presentation of the Fool, played by Lloyd Hutchison, as a kind of old vaudevillian, was well done and very sad. Here is a man who sees that the world has passed him and his master by. However, I hated the way the production took him out. In the text–before he simply disappears from the play–he has this last weird speech about seeing the past and future and Merlin (yes, that Merlin); here, they cut that speech, Edmund finds the Fool, and advances on him with a knife at the blackout going into the intermission. I understand the rationale, but it just didn’t do it for me.

Also not doing it for me were the performances of what I’ll call the “youngest generation” in the play: Cordelia and Gloucester’s boys. Edmund seemed to be trying far too hard to be funny, Cordelia was acting in a different style than just about anyone else in the play, and Edgar…well, Edgar’s pretty much an impossible task, balancing intelligence, credulity, sanity and insanity.

I want to make special mention of Regan, played with classic “middle child syndrome” by Kirsty Bushell. This Regan demanded attention, and she did this in the middle portion of the film through the use of sexually provocative dress and flirtation. When she and her husband arrived at Gloucester’s compound, I was completely distracted by her short skirt and long legs. And this bugged me, but then I realized that this was the point. And as the play moved on, it completely worked for me. 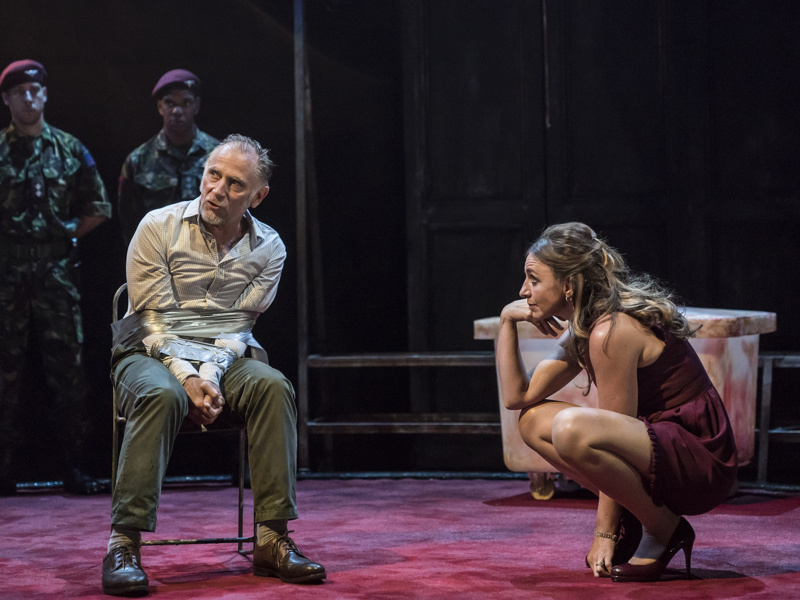 My only criticism is that they missed a Regan-centric opportunity in the Gloucester-blinding scene. If they’re going to be so brutal as to gouge out his eyes with a meat hook, then why not move Cornwall’s line of “Upon these eyes of thine I’ll set my foot” to Regan and have her take out the other eye with a stiletto heel… gross yes, but given Bushell’s performance, it would be fitting.

Overall, I recommend it highly… just be ready for a marathon

Then there’s the BBC/Amazon Prime version. If the NTLive is a marathon, then this one’s a sprint: under two hours. Severely cut and directed by Richard Eyre, who relies on cinematic storytelling to drive the narrative forward, it jettisons language made superfluous (or at least redundant) by the imagery.

Now, you’d think I’d be all for that, and love this version because of it.

Not quite so fast, my friend.

While I found the cut of the text exceedingly well done, I thought some of the performances and the direction left so much to be desired, that I actually enjoyed the marathon more.

Like the NTLive, I was left cold by the “younger generation”… Cordelia, aloof. Edmund, I think, is undone by what is so great about his theatrical character… his soliloquies. Eyre’s breaking of the fourth wall just didn’t feel right for me. Edgar, well, you know how I feel about that character (and it doesn’t help that actor playing this hero is so firmly entrenched as a villain [Sherlock’s Moriarty] that I kept waiting for him to turn bad).

This is not to say that there aren’t great performances here…there are.

Hopkins is very very good, and the chopped script makes his dementia seem even more blatant; he falls asleep in public and wakes up unsure of himself and his surroundings. There are some sexualized acts by his king: weird kisses of Albany and Goneril, a from-behind manhandling of his eldest daughter as well, that just didn’t play right for me. I think they were intimating earlier sexual abuse, but it was either too subtle to be clear or to over the top to not be.

There are some other striking moments that while neat visually didn’t seem to serve a purpose: Instead of putting Kent in stocks, Cornwall leaves Kent hooded with the seeming expectation of execution…it’s a great image, but so what? Then as if to say, we’re not just gonna do the average plucking out of Gloucester’s eyes (as if there IS an average plucking out of eyes), Cornwall uses Regan’s pointed fingernail to put out the old man’s eyes. Edgar actually takes Gloucester to the cliffs of Dover? Why? For a great exterior shot? And do we really need a final card that tells us “The End”? Really?

As much as a long experience as the NT Live version is, it is so much more realized than Eyre’s version… now if they could have just used some of Eyre’s cuts in the NT…