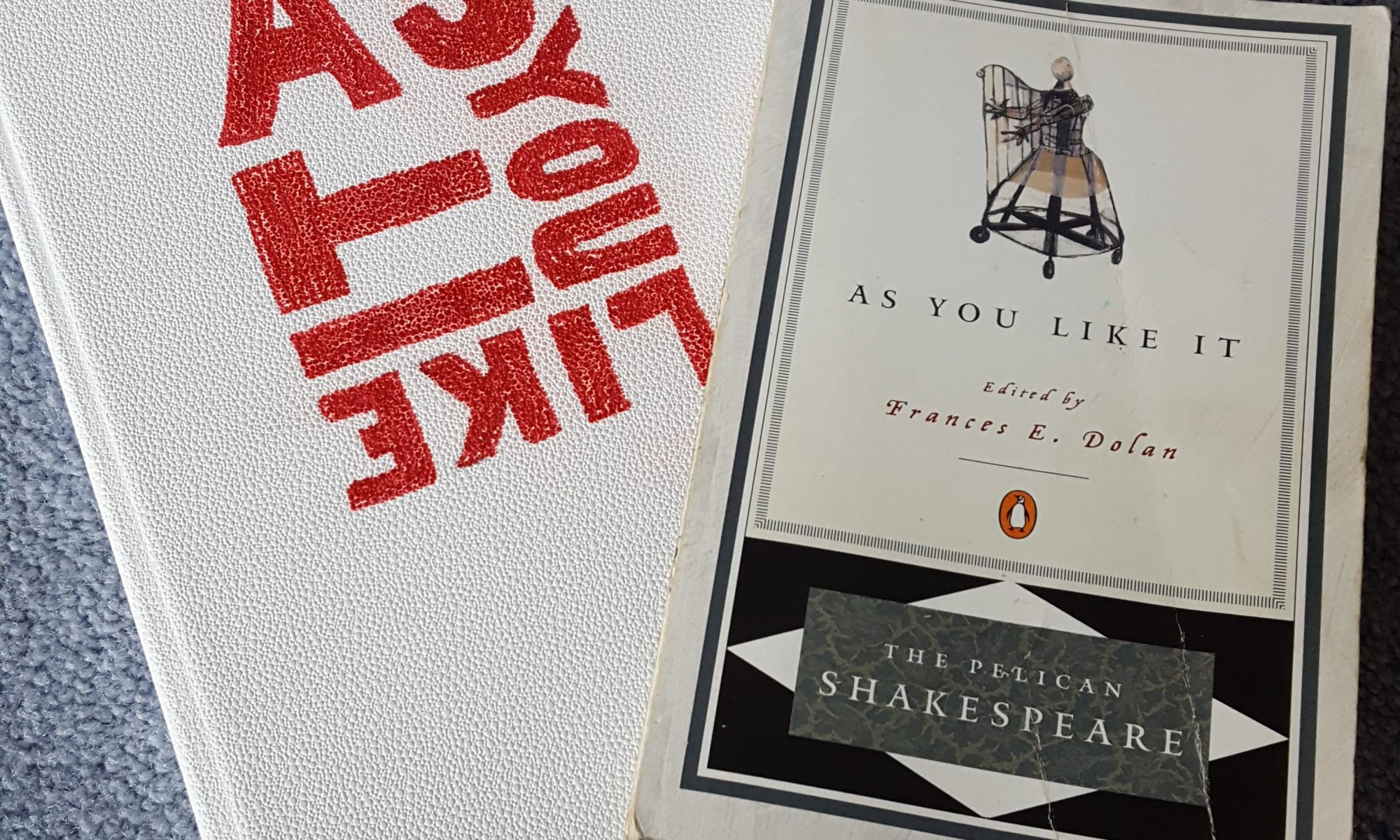 OK, so yesterday, I talked about getting through a first pass of the text, and seeing the need for re-sequencing of scenes to assist in cast-size reduction. And I had hinted at a discussion of the placement of intermission for this upcoming production of As You Like It.

After the jump are some pretty intensive spoilers, so if you want to come to the play without knowing where I’m thinking of taking it… do not read on.

OK, so I’m going to set the play in the 80s because I think the storyline of ambitious brothers pushing out laid-back brothers would work in the go-go Me-decade of the 80s… especially with a Gordon Gecko-esque Duke Frederick and a prototypical Ben or Jerry as Duke Senior. I see the outcasts in the forests as regular folks, just people who don’t want to be a part of the Wall Street rat race.

Now, there’s an Arden, NY… about midway between NYC and Woodstock (which is where/when I was going to set the play IF I got the directing slot what would run during next August…as that will be the 50th anniversary of the music festival)… and I still may set it there (but not then) for the “Greed is Good” (NOT) vibe I could get from Wall Street. But I’ve also played around with northern California as a geographical setting (San Francisco versus the redwood forests)… not really sure at this moment.

Plus, I want to play around with music. A lot. Maybe even some lip sync stuff using songs that comment on the action. And as part of that concept, I have the idea of having an on-stage DJ during the entire show: DJ Kweez.  As in Jaques. No, not that melancholy bastard Jaques, but the unfortunately named middle de Boys boy Jaques… you know, the one conveniently off at school until the last scene, when he arrives to deliver play-ending exposition. Guess he wasn’t studying too much at college, eh…

Anyway (back to intermission), I was thinking that maybe I would break the play midway through Act Three, Scene Two, as Rosalind and Celia spy the approach of Orlando.  The two lovers on stage together, yet to interact in their non-real world guises. Tableau. Fade to black. Then when we came back I would have the DJ “rewind” us a minute, a handful of speeches, to bring us up to speed for the second half. I thought that might be fun (still do). But in going over the text last night, I realized that with the cuts that I’ve made thus far, I’ve dropped the overall length from 96 pages to 87…and I don’t need to put the intermission there, I could do it where it would make more sense… at the end of that scene, when Orlando follows Ganymede and Aliena back to their place… 48 pages into a 87-page length… just over half-way through, which I like (makes for a slightly shorter second half).

[of course, I’d REALLY love to break it just BEFORE that scene, so that the second half of the play would begin with Orlando vandalizing the forest with his poetry… in other words, the beginning of that same scene… the problem there is that instead of breaking the show 48 pages into 87, it would break closer to 38 pages in… so that the second half would be much longer than the first, and I’ll pass on that]