OK, so I’m trying to get back into a weekly rhythm (yeah, good luck with that). And thus, it’s Thursday and I want to get back to some media discussion. Last Saturday, while I was on my PCA trip, I took in Macbeth at the Hanna Theater in Cleveland, Ohio… The first striking thing about the Charles Fee-directed production was obvious when we walked into the theater. They had created a quasi-Elizabethan acting space… They even created audience seating on the stage. Alas, I was too late in ordering tickets to get those seats, but it was still an interesting idea. Interesting, but not well-used. It felt gimmicky.

Not gimmicky, though, was the use of the octagonal raised platform in the center of the stage. The floor to either side could drop down, and the center of it could open up as well. This, unlike the onstage audience, was well-deployed, especially in terms of the witches and Banquo.

And on the subjects of the witches: they were a highlight of the show. They appeared dressed in black, with long flowing sleeves that extended from the actors’ hands with canes in each. When they would raise their arms, the sleeves seemed to become wings, and they looked and flitted about like crows. Even better, though, was when they moved about the stage using the canes as canes: they looked otherworldly, almost insect-like (very much like what I’ve seen of Antony Sher’s Richard III from 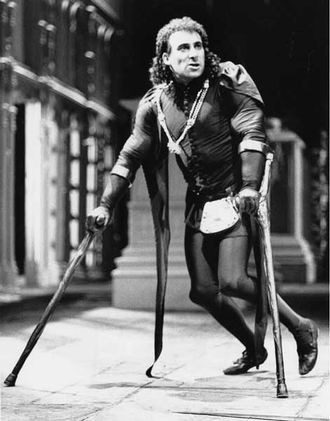 decades ago). At times, they would appear on stage, and then freeze becoming scenery. Very effective (though not without one missed opportunity–one which I plan to steal if I ever the the chance to direct the Scottish Play: When Banquo tells Fleance to flee, I think I might have one of those witches-turned-trees move to prevent the murderers from catching the boy…).

The leads were solid if not overwhelming. Lynn Robert Berg as Macbeth was almost too strong… there really wasn’t any sense of vulnerability to him, even when he was wavering in his conviction to kill Duncan. Erin Partin as his lady, really only came to life in her sleeptalking scene.

Now, the performance we attended was opening night, so there may be improvement to it as time goes by and it approaches its April 15 closing date. I would recommend seeing it, if for nothing else but the witches, but your expectations should not be too high.