OK, it’s Friday, and this is the day of the week that Hollywood loves to open a new flick, and boy is there a blockbuster on tap for today–Star Wars, Episode VIII: The Last Jedi (which I’ll catch tomorrow). But I have something else in mind: one of the many productions of The Tempest that are available on video. This week, I’m taking a look at a 1983 video production, starring Efrem Zimbalist, Jr.. 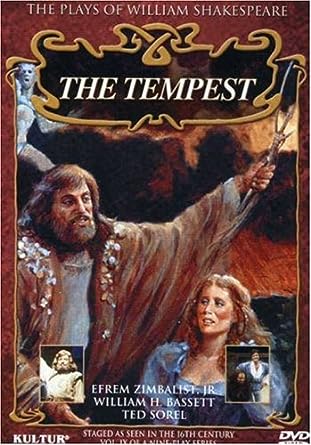 Now, confession-time: my first Tempest was a live production that had Stephanie Zimbalist, Efrem’s daughter, as Miranda. That production holds a special place in my heart. Four years later, her father–whom I’d watched in the old TV series The FBI, when I was a kid–would take on the role of Prospero in a production that is part of the “Bard Productions” series, which all take place on the same faux-Globe-ish set. This production does not hold a special place in my heart.

Maybe it’s the fact that this is the first video I’ve watched in a long time because of my sub-hiatus. Or maybe it’s just bad.

The piece is directed by William Woodman, who had done a couple more of these Bard Productions. I’m not sure how much of his direction is in the visual capture of the play vs the acting of the original production (if there ever was one). Regardless, when compared to Julie Taymor, this feels bland, almost pedestrian. It’s very stagey, and never takes flight.

Zimbalist gives an interesting performance. He’s understandable–meaning we get an idea of the meaning of the words, and it seems he knows what they mean (not something that can be said for much of the cast). But his gestures–very actor-y (Woodman might have done well to hand out Hamlet’s advice to the players during rehearsal)–are almost too spry. His reading of the “Our revels now have ended” speech is good, insightful, but it doesn’t seem to fit the scene itself.

The actress who plays Miranda overacts, Ariel over-gestures like his master, Caliban appears more like Oscar the Grouch meets insane homeless man, and I never bought for a minute that Ferdinand understood what he was saying. And add to this a Trinculo played by TV’s Horshack (sp?) from Welcome Back, Kotter, and it’s obvious that the acting didn’t work for me.

The play’s structural problems–long scenes–are not helped by the production’s slow pacing. Nor is the play serviced well by one of the worst jump-cuts I’ve ever seen: the banquet for the shipwrecked royals turns into skulls in an almost laughably ridiculous cut-away to their reactions and then back to the table.

Like I said, Zimbalist isn’t bad, but he’s not enough to recommend this … but it does make me wonder what a production with him and his daughter would have been like.