OK, it’s Friday, and this is the day of the week that Hollywood loves to open a new flick, but I have something else in mind: one of the many productions of The Tempest that are available on video. This week, I’m taking a look at a not-quite Shakespeare adaptation: 1956’s sci-fi classic Forbidden Planet. 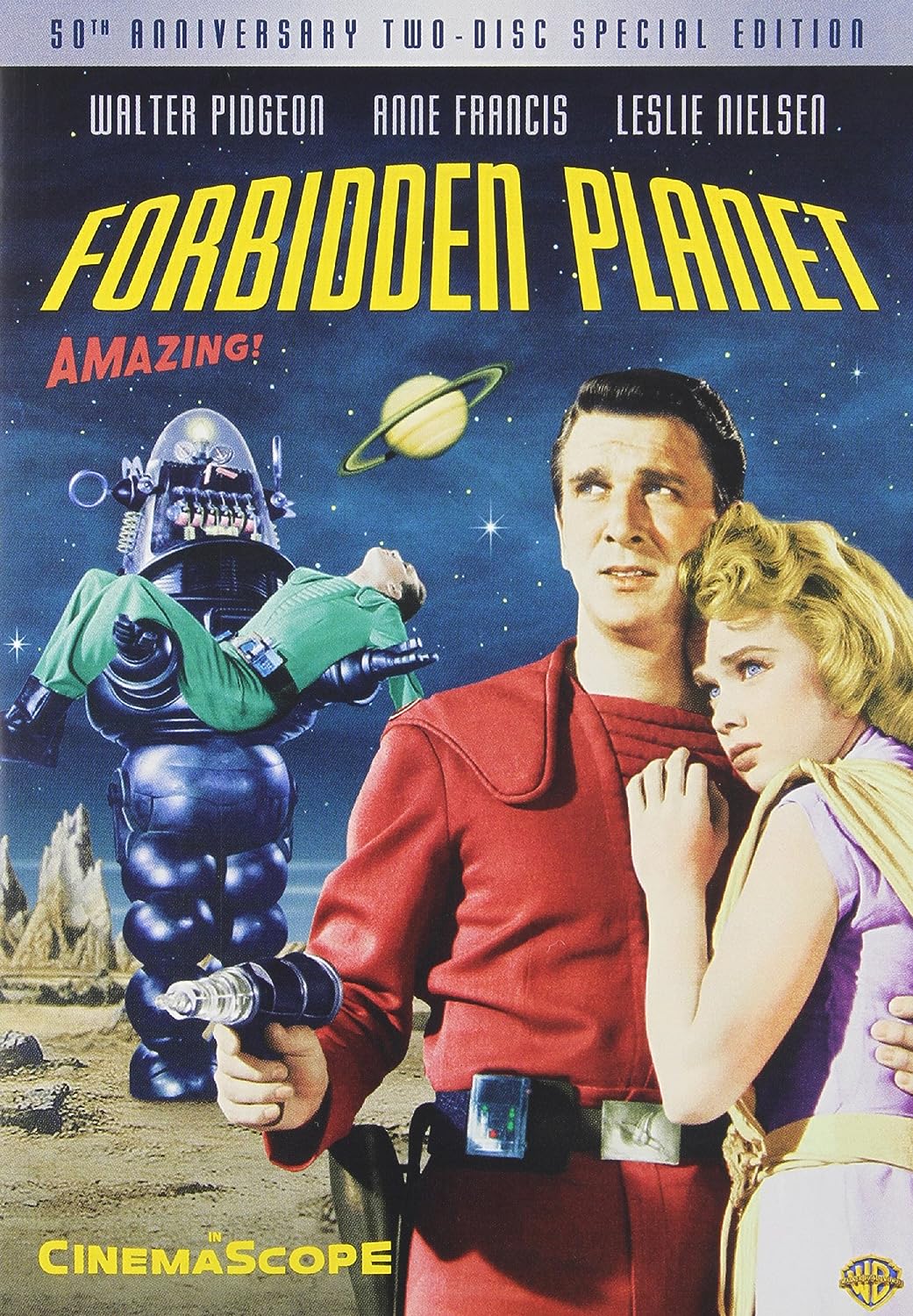 Since I was a teenager, I’ve heard how Forbidden Planet is The Tempest. Now, I’ve seen it…but I don’t SEE it…

I mean, I get it. Totally get how Throne of Blood is Macbeth. And The Lion King is Hamlet (sorta).

But, for me, at least, Forbidden Planet is barely The Tempest. If at all.

Yes, there’s a father and a daughter stranded in a remote location (the titular planet). Yes, there’s an Ariel analog (or is that a Caliban analog…or both?) in Robby the Robot. And yes, we do get a couple (literally) of comic scenes with the spaceship crew’s cook and Robby and liquor (thus, the Caliban connection).

But that’s about it.

Given the plot starts with a mission to search for survivors of a mission from twenty years earlier–from whom nothing has been heard–there’s no sense of a previous usurpation of the Prospero character (here, a philologist named Morbius, played by Walter Pidgeon. Thus, the element of revenge–and later forgiveness–is removed from the thematic elements…the loss of which kills any true connection to the play. Even the Ariel analog is questionable: this robot with “absolute selfless obedience” is one that Morbius built, not one that he found.

I’m supposing that in the mid-50s, this was pretty cool sci-fi. Now, however, it’s dated to the point of camp…I can see why it is so ripe for parody–like the stage musical comedy Return to the Forbidden Planet. Its casual when-America-was-great sexism is a tad disconcerting: Morbius’ daughter Altaira (a pretty, and pretty vacant Anne Francis) gets passed around for ogling and kissing so much, I began to wonder if this was more a Troilus and Cressida analog than one for The Tempest.

As a movie fan, this was fascinating viewing, though. The bright “Eastman Color” palette and widescreen Cinemascope vista was impressive. And seeing Leslie Nielsen (someone who is now the epitome of comic self-mockery) in a straight heroic role was fun–as was Earl Holliman as the aforementioned Cook. But fascination alone does not a great Shakespeare adaptation make.

I really can’t recommend this.

But I do have to give writers Irving Block and Allen Adler, and director Fred M. Wilcox, props for one thing though: the creation of an id-fueled “big bad” in the plot does make me wonder if there isn’t grist for a true production of The Tempest in which Prospero’s id is what drives his revenge, a warped ego calling for the enslavement of Ariel and Caliban, with his superego restoring balance and thus forgiveness at the end.