It’s now fall and the time of good movies released to theaters (in theory), and this being a Friday, it’s time to take a look at a video version of our play under discussion. Thus, let’s take a look at The Tempest from the BBC’s Complete Works, an entry from 1980. 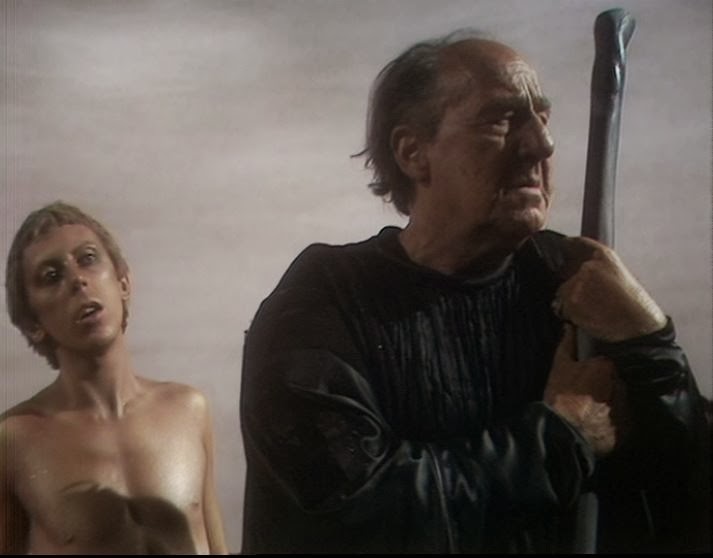 As a part of the second season of the series, and the last with original producer Cedric Messina in charge, John Gorrie–who had directed Twelfth Night earlier in the season (and some of the first season of Doctor Who nearly two decades earlier)–mounted a production in late 1979 with a broadcast early the next year.

He cast Michael Hordern as Prospero. We’ve seen Hordern quite a bit in this series–Lear, Capulet in Romeo and Juliet, Lafeu in All’s Well, even Jupiter in Cymbeline–and as always he’s solid. But more importantly, at least for me, was Gorrie’s “casting” of the visuals. Greater use of handheld camera in the opening scene creates this great sense of confusion. Then we see Prospero on the cliff. And Gorrie gives us this incredibly neat rocky set…beautiful not realistic per se, but perfect for this magical play.

Not quite as perfect are the depictions of the magic itself. The production is filled with super-impositions…which for the time, I suppose was television par for the course (the effects were created by the BBC originally for use in their Doctor Who series…was this why Gorrie got the nod?), but they feel incredibly dated today. Also problematic was the visuals regarding the non-human characters. Ariel is a bronze, near-naked effeminate male, while Caliban looks like a bizarre bigfoot clone. There’s some interesting directorial decisions with this sasquatch, however: the camera–while not subjective to Caliban–does seem to often place him in the foreground to Prospero. Not quite sure what this is supposed to mean, but it was interesting, as was his seeming love for Miranda (so that when he tells his new masters they can bed her, it feels like a scorned lover trying to make his ex suffer).

The play itself is relatively short, but with the songs and dances in the play, it runs nearly two and a half hours. And even the seeming comedy–with Caliban and the drunks, or between Prospero and Miranda–is dry and humorless. The delivery of the two major speeches are less than powerful as well. The “our revels” speech is incredibly vexed and angry–which makes sense–but there’s no sense of the wistfulness that is also often seen…and this lack of wistfulness extends to the epilogue.

So if it sounds like I’m ambivalent about this one, you’re absolutely right. Should you see it? Yeah, I guess…but mainly because after this one I’m concerned the play may be a tough nut to crack on film.