We interrupt our Monday Shakespeare discussion for this (sorta Shakespeare-related) spiel. Friday night, I got to combine two of my favorite things: Shakespeare (duh), and film noir.

I’m a huge film noir fan, and in southern California, your best bet to catch some of ’em in the act is to head on down to the Egyptian Theatre in Hollywood, run by the American Cinematheque,  around start of spring for their annual noir-fest. Called Noir City (the link is for the main festival held in San Francisco), and brought to you by the folks over at Film Noir Foundation, it’s a multi-day series of double features. This year, their 19th, they’ve programmed it a little differently: each night covers one year, and has an A-picture, followed by a B-movie.

Last Friday night was their opening night, with 1942’s This Gun For Hire, paired with Quiet Please, Murder. The double bill was kicked off by a saxophone quartet and an introduction from FNF mainstay Eddie “the Czar of Noir” Muller.

Now, I’d seen This Gun For Hire only in bits and pieces on television, so seeing it on the big screen in a new print was pretty damned cool…though I was a little bummed that Veronica Lake wasn’t as hot as I had imagined (and boy have I been imagining) all these years.

So, what does all of this have to do with Shakespeare, you ask.

Well, Quiet Please, Murder was set in the world of book thieves and forgers. And the book (or MacGuffin) that sets the narrative in motion is a rare “Burbage folio of Hamlet” — so rare that it doesn’t exist, natch. Yeah, I know, pretty thin rationale for this interruption of Coriolanus. Forged-paper thin, if you want a bad joke. 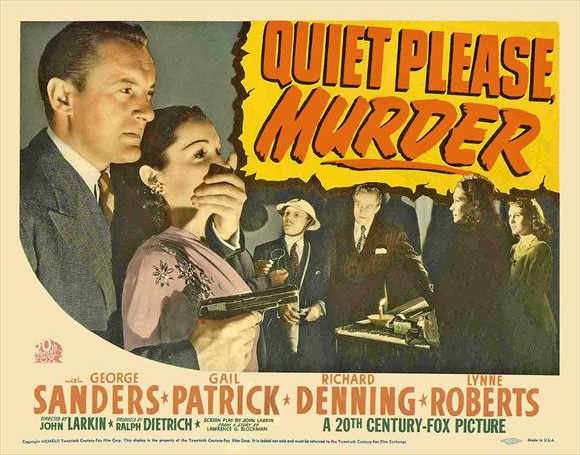 But this film, beautifully shot, projected from a 20th Century Fox archival print, is one I’d never seen before (I had never heard of it before the release of this festival’s schedule). It’s never been released on DVD, even. And it’s fun. Some noir are fun because they haven’t aged well, but this one seems to be having fun (if you’ll allow that little foray into personification). Shot in and released in 1942, it makes very topical references to Nazis, our boys fighting overseas, and most importantly, air-raid bomb shelters in Los Angeles (real thing: a supposed Japanese air-raid in February of ’42 caused a blackout to be imposed and alarms to be sounded). But it also has a quirky sense of humor: the book forger who fancies himself (and everyone, according to his unusual interpretation of Freud) a masochist (George Sanders), an ice-queen accomplice (“Lady Dracula”) who’s more than willing to become a free agent (Gail Patrick), a smooth-talkin’ private dick with a mercenary brain but a warm heart (Richard Denning), plus a bald, deaf hitman/thug, and a plucky librarian ( Lynne Roberts)…and, of course, that Hamlet folio.

I would say the first twenty or so minutes of the 70-minute running time–the exposition–leads up to the remainder of the movie taking place in the same LA library where that Hamlet was stolen in the opening scene. And the pacing never flags once we’re in the stacks, our hero’s in danger, and the city’s in blackout.

Good stuff. There’s a horrible rip of the movie on YouTube, and it doesn’t do this flick justice. It’s just too cool.

Tomorrow, back to Shakespeare!