In 2011, Ralph Fiennes made his cinematic directorial debut with Coriolanus, for BBC Films. Here, he reprises a role he had played under the direction of Jonathan Kent at the Almeida Theater in London a decade earlier. 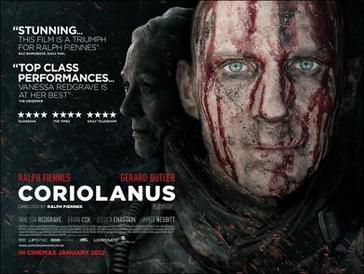 For his own film, Fiennes brings the play into the present-day in “a place called Rome.” Stylistically, this of-the-moment tone is buttressed by Fiennes’ (and screenwriter John Logan’s) use of CNN-style footage and graphics: chyrons with “Roman Food Crisis” and the like. And as is the case in reality, the main players watch and respond to media–news reports that bring the exposition to the film audience.

While Fiennes and Logan use contemporary stylistic flourishes, they also do not shy away from playing with the 400 year-old text. Huge cuts are made–entire sections, major sequences of scenes, are cut, in some cases, replaced by purely cinematic storytelling (visual representations of what had been descriptive dialog in the play); in other cases, dialog that doesn’t carry meaning important to Fiennes’ concept is simply jettisoned. More obviously, Fiennes and Logan move entire scenes around. The best example of this comes near the beginning of the film. In the midst of Act One, Scene One, we get an interrogation of a Roman soldier, held captive by Aufidius. The dialog actually comes from Act Four, Scene Three; the filmmakers punctuate the scene by the murder of the captive and Aufidius turning toward the camera–we’ve been watching this as a kind of YouTube video on Martius’ HQ laptop. Purists, I’m sure had a conniption; but damned if it didn’t work.

In this film, we actually see Martius being an enemy to the people, as he suspends civil liberties, and sends in riot police during the opening mob scene. This scene, combined with the cellphone footage shot by the rioters, gives the film an almost Marxist vibe. A graffito we see early on reads, “F@ck the rules” … there is definitely a sense of iconoclasm in the storytelling.

This changing of the guard may be apparent in the story and style, but not in Fiennes’ casting choices. Vanessa Redgrave portrays a monumental Volumnia, replete in an austere military uniform; she is a force to be reckoned with. Brian Cox, too, as Menenius, adds heft to the proceedings (as does, of course, Fiennes himself). Gerard Butler, at first, felt like an odd choice–action star as Aufidius. But it actually works quite well–in this case, the wholesale cutting of the script works to the filmmakers’ advantage: Aufidius is a man of action, not words. There’s not much of Virgilia’s lines to be cut, but even with a full text, Jessica Chastain is saddled with a thankless role, and it’s not one of the film’s strengths.

And there are many strengths. The film’s editing, both textual and cinematic, pushes the pace along. There are times that we get snippets of scenes as almost memories or flashbacks, placed out of sequence. And it works. The house-to-house fighting makes for the perfect analog for Martius’ taking of Corioles. The scheming tribunes are well-presented, as is the fickle mob. And the use of the text’s nameless but numbered citizens, senators, and plebeians, as cable TV talking heads is a great solution to a dramaturgical dilemma.

It’s not a perfect film, though. I think Fiennes attempts to get a little too artsy for his own good at times. One of his favorite visuals is to go from blobby out-of-focus into crisp focus (and vice-versa) for no apparent reason and to no real effect. I also think Fiennes may have been going for some kind of Oedipal exploration of Martius, but with so much of the dialog cut, it’s not clear. The pacing–pushed so hard through much of the play–slows to a crawl in the final scenes. And the final killing by Aufidius might be needed for a movie audience, but it gives the character almost too much agency…especially in a film that excises his final speeches.

Still, overall, I really liked this film…for many of the same reasons as I liked the Kurzel/Fassbender Macbeth from a few years back–it’s simply bravura visual filmmaking…with a decidedly directorial stamped vision. If you’re not a purist, I’d definitely check this out.

[note: I had to write a review of a Shakespeare film for my Masters program class that’s coming to an end this week…you’ll see that assignment tomorrow…]

This site uses Akismet to reduce spam. Learn how your comment data is processed.