It’s Friday, so welcome to the fourth film in our six-week Friday Film Focus on Antony and Cleopatra. Each week, I’ll present a capsule review of an A&C video, with full reviews coming in a future podcast.

In 1972, the Royal Shakespeare Company mounted a production of Antony and Cleopatra directed by Trevor Nunn, with Richard Johnson and Janet Suzman in the lead roles. Two years later, television director Jon Scoffield adapted that production for television. 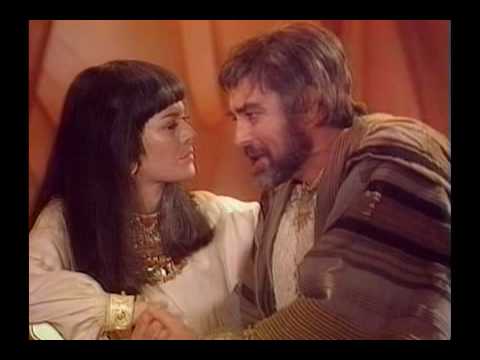 It opens with a split scene, the Roman soldiers discussing Antony, then going to Egypt; Rome in black and white, Egypt in color. Stark versus lush. It becomes immediately apparent that Suzman is using subtle brownface in her portrayal of the queen (a shame, and not historically accurate, as we’ve said before…Cleopatra was of Greek descent)…and it’s a shame, because her performance is great (as is Johnson’s as Antony). These are two performers, playing for the crowd.

And they are matched in performance by Patrick Stewart (with hair) as Enobarbus. He’s comic (even getting Antony to laugh after the news of Fulvia’s death arrives), a party-er, a storyteller, but a military peer of Antony’s who’s not afraid to argue with his general.

Cleopatra here is mercurial in her mood changes, and she makes it feel sensitive, almost fragile. And near the end when she meets with Octavian, she’s less compliant, less smooth, letting the “performance” go since she knows what is happening soon. On the other hand, Antony here is grizzled, at turns overconfident, enraged, devastated, but ultimately a complete screw-up, failing horribly in his suicide attempt. These are two characters at the end of their primes.

In this production, we see the battle that takes place in Act Four. What we don’t see is Pompey. Seriously, he’s cut completely…we still get the feast, just no Pompey. And you know what, I didn’t miss it in the least. And it knocked the running time down to a relatively svelte two hours and forty minutes.

There are some interesting points here: Charmian’s ability to massage Cleopatra’s ego; Stewart’s absolutely wonderful telling of the barge story; Scoffield’s decision to show us what was happening in Alexandria during Octavian’s speech, and the obvious love Octavia has for Antony.

There are few missteps, though: a few scenes seem to have fogged edges for no apparent reason, Octavian’s cruelty to his sister (which I don’t buy given his sensitivity in other moments in the play), and that damned brownface.

This is a solid production, well worth your time… but I could only find it in a mediocre YouTube presentation. It’s part of the Antony and Cleopatra playlist on our Bill / Shakespeare Project channel.