In 2007, the Royal Shakespeare Company mounted a production of King Lear with Ian McKellen in the lead and Trevor Nunn at the helm as director. Within days of its closing in February of ‘08, they began a soundstage production of the play, which was then filmed and broadcast at the end of that year in the UK and in ‘09 in the US on PBS. 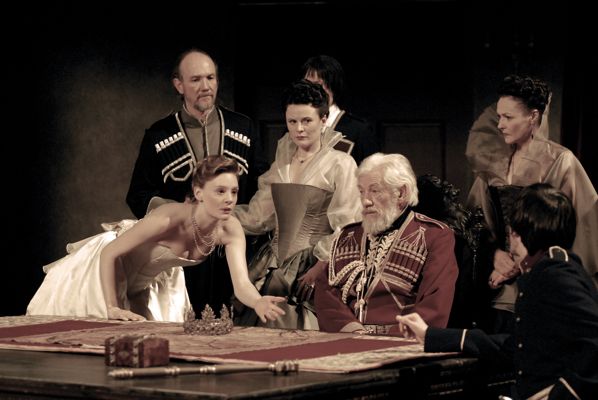 Now, I’ve got to be honest, and I’ve said this in the past, I’m not a huge fan of Nunn’s Shakespearean efforts. In my opinion, they come off as rather dark (even the comedies) and if not overly reverent, then at least overly serious.

And there is a bit of that issue here…

Though the dress is fairly modern (maybe 19th century?), the reactions of the characters would have fit at Stonehenge. When Lear invokes “the sacred radiance of the sun,” everyone else assumes a prone position.

Lear begins the play as someone who either forgets or is afraid he will forget; his opening speech is done with notecards. Still, he’s a man with a sense of humor, and he is amused by his daughters’ proclamations of love…until Cordelia says her nothing. When Kent tries to intervene, McKellen’s Lear physically strikes him. His decay into madness, which doesn’t truly culminate until the scene when he meets Gloucester, is very subtle, nicely done.

Other actors stand out as well. Philip Winchester as Edmund, Romola Garai Cordelia, and the duo of Monica Dolan and Frances Barber as the older sisters–all are exemplary; Sylvester McCoy (the seventh Doctor Who!) plays the most foolish Fool I’ve seen in these videos.

This is also the only production in which we actually see what happens to the Fool. Lear says in his final scene, “And my poor fool is hanged.” While most editors take this to be a term of endearment for Cordelia, Nunn takes it literally. When the rest of the group leaves the hovel after the storm, the Fool remains behind; raiding soldiers, searching for Gloucester and Lear, come upon the Fool. After humiliating him, they hang him. I liked the scene (not the hanging of the Fool, but the artistic choice made).

It’s not the only great choice made. But Nunn being Nunn, much of the middle of the play is played on a darkened stage with dark backgrounds. It might work in the theater, but onscreen, it’s just hard to watch. Another false step for me was the use of a voice-over for Edgar’s play-closing speech. No other soliloquy is in voice-over, so why now? Especially when this kind of final speech is given to the leader who will return this chaos into order.

Still, my Nunn-nitpicks aside, this is a pretty damned good Lear. One of the best I’ve seen. Easily as good as the Ian Holm, with the BBC, Pryce and Welles close behind. And the best news is that it’s readily available for free streaming on the PBS site. You should definitely check it out.