Just before the turn of the century–and I have ambivalence using that phrase… it’s kinda cool that I have the opportunity, kinda sucks that that makes me feel old–famed director Richard Eyre mounted production of King Lear for the National Theater in London with Ian Holm in the title role. It was successful enough for the BBC to restage it on a film set for television broadcast (in both the UK and the US, as part of Masterpiece Theater) in 1998. 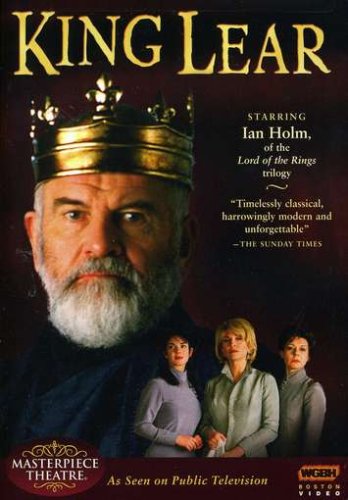 Watching it, I wonder what the stage version was like, as this was very cinematic in technique. Not only does Eyre use voice-overs for the soliloquies (what there are left of them…but more on that in a minute), but in the opening scene, Edmund has as voice-over his Act One, Scene Two “bastard” soliloquy, as he’s listening to his father speak to Kent. Very effective.

The set is presentational (there’s no attempt to make the set look like a realistically representational setting). For example, the opening scene takes place in an all-red room, no decorations save for the red table and chairs and red walls. The costuming, too, is less a clue to time and place than of person and status. For the older sisters, the dress is quasi-modern, but when we see Cordelia in Act Four, she’s in armor and looks like nothing less than Joan of Arc. Not exactly modern.

Since this runs at a pretty tight two and a half hours, it’s been judiciously edited, and Eyre’s script is interesting in terms of what’s been cut. Cordelia’s asides during her sisters’ love declarations in the first scene are gone. Most of the major soliloquies, too, are either truncated or in some cases eliminated altogether; but these speeches are rendered unnecessary by the context of the abridged voice-over or the silent performance of the actor (you can almost see the wheels turning in Finbar Lynch’s Edmund as Gloucester reveals his loyalty to Lear).

Ian Holm, as the not-quite-as-old-as-you’d-imagine king, just freakin’ kills it from the very beginning. Some Lears are great once you get to the storm (as in the Kozinstev), or at least Gloucester’s castle (see Brook). But that opening scene can tricky. How do you show the sudden change in Lear when Cordelia doesn’t give him the answer he desires? Holm’s solution is stunning in its simplicity: don’t make the change sudden. Make LEAR sudden, make him mercurial. His first words are orders barked out, and only after a second do we (and Gloucester) realize that it’s directed at him. He’s constantly changing: angry, needy, overly familiar, showy, humbled, crushed, incensed, fearful, and only then mad… of course, by this point, it may be less insanity than the inability to be any single emotion. It’s an endlessly interesting performance.

For me, the only misstep comes in the centerpiece of this or any production: the storm. The sound of the rain and thunder is so loud, it’s hard to make out Lear, and it renders the Fool completely incomprehensible. Yes, since this is the center of the play, it’s a bit disappointing, but it doesn’t kill this production.

It’s that good. This is definitely one to search out.