In 1983, just a year after the very good (bordering on great, in my mind) BBC production, Granada Television produced another UK broadcast version, this one directed by Michael Elliott and starring arguably the most famous Shakespearean actor of the twentieth century, Laurence Olivier. Olivier was 75 when he appeared in this, and it would be his last Shakespearean role. 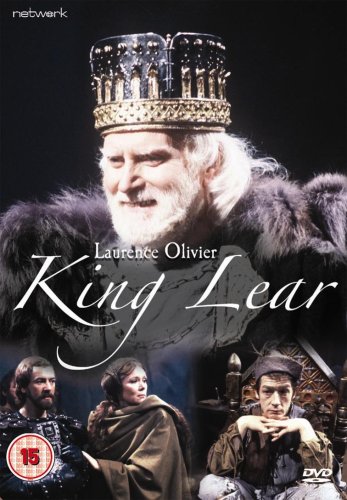 And he’s not the only heavy hitter in the production: John Hurt plays the Fool; Diana Rigg, Regan; Brian Cox, Burgundy; and Robert Lindsay (who appears in three of the BBC Complete Works productions), Edmund. With a pedigree like this, you’d expect this to be very, very good.

This is a class production.

It looks great. More representational than either the Miller/Horndern and Eyre/Holm versions, it’s performed on a soundstage, but a relatively realistic one, one on which a horse or two don’t look ridiculous. This Stonehenge looks as good the one in the Blessed film.

Of course, it sounds incredible, too. Olivier was old but not declining in skill as a vocal actor. Like a veteran athlete, he plays smarter if not harder. His Lear is a marvel of subtlety. Imperious, but distracted. Self-pitying and fearful. When we see him post-storm, he’s crazed, but his kinesthetic memory is still there, knowing how to trap and skin a rabbit. And when the vocal performance seems to have reached its limits, his naturally aged body takes over. They shave his beard once he’s in Cordelia’s custody, and that loss of facial hair reveals greater visual age. This has a rather shocking effect on the viewer (at least this viewer), both empathetic (damn, he’s old), and impressive (and wow, he can still carry Cordelia’s dead body).

The supporting performances are exceptional, and the production runs tight and taut at just under two and three-quarter hours. No edits scream out in their exclusion, and the script does include the Quarto trial scene.

I’m making this sound nearly perfect, and honestly, there’s really nothing I can truly find fault in. Sure, the eye-gouging scene could have been more visually intense (but I have to wonder if that is because I like Titus or because this is my sixth Lear in the past few weeks and the scene has lost some of its quease-factor), but I can’t downgrade it for that.

So, it must be a perfect, right?

Nope. And it’s not even my favorite of the bunch.

Why? Because despite an incredible vocal performance and physical appearance by Olivier, I was never moved by this production. Not by Lear’s plight, nor that of Gloucester. The closest to emotional evocation was when Edgar sees his blinded father for the first time, but even that moment doesn’t last long.