In 1974, the New York Shakespeare Festival presented, as one of its free summer productions, King Lear directed by Edwin Sherin, and starring James Earl Jones as Lear, with Paul Sorvino as Gloucester, Raul Julia as Edmund, and Rene Auberjonois as Edgar. 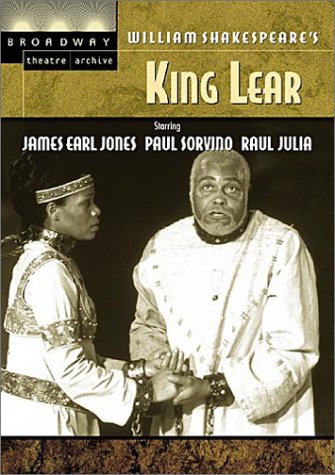 It was captured broadcast on PBS’s Great Performances. But is it really great?

It is, if you break it down into it ingredients…

Jones is excellent. He fills his performance with great inspired choices. His is a grumpy Lear from the start. One who still carries a sword, but can only wield it as a cane. When angered, his inclination is to violence; only when he tries to pick up and throw a chair, he’s so weak that he can’t get it off the ground. In the storm, in which his physicalized performance is incredible, he is a man more sick than mad. It’s as if his sickness, his weakness, brings on a catatonia, that then leads to delusions (and internal voices he allows out), and only then does he break down and become mad. By the time he reaches his final moments, even his “Howl, howl howl” is but a whisper.

Julia makes for a snarky, smirking villain, cruelly comic and flirting with Regan as her husband puts Kent into the stocks; Auberjonois plays Edgar as a weakling who finds his footing only through adversity, so that only at his worst–coming out of the storm–does he look his best, a kind of hippie, dirt-devil Roger Daltrey ready to become heroic.

I suppose in an attempt to play to Jones’ non-whiteness, the costuming gives a African (or maybe a vaguely middle eastern) flavor. They’ve cast three African-American actresses, but none stands out from the other. But at least they fare better than Paul Sorvino as Gloucester. He’s a great actor–I mean, c’mon he’s Paulie from GoodFellas–and he was a pretty good Capulet in Baz Luhrmann’s Romeo + Juliet, but here, it just doesn’t work.

The production is not horrible; it contains some great moments. But these are but mere moments in what is a fairly ponderous three hours.