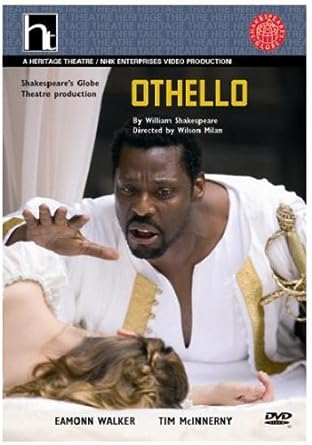 Since Shakespeare’s Globe is a physical recreation of the second Globe Theater in London, they make an attempt to stage their productions as they would have appeared in Elizabethan times, complete with musicians, contemporary costumes, and a jig at the end. The plays are presented to an audience of both groundlings and seated members in daylight with the theater open to the sky. And therein lies a problem: on a number of occasions you can hear a plane fly overhead.

There are few cuts in the text. They present the oft-cut clown parts; but they cut much of the Iago’s “praise” performance at the harbor in Cyprus before Othello’s arrival. Of course, that may have less to do wanting a cut for time or understanding, and the fact that this Iago is more consistently angry than most; the playful, almost flirtatious moment at the harbor might not fit.

Unlike the 1989 Johannesburg version, Walker’s Othello is no mere storyteller or lover, he’s a warrior, but one who is powerless, almost enthralled by Zoe Tapper’s Desdemona. Meanwhile, Iago, as played by McInnerny, is angry, bitter and troubled–not necessarily by a conscience, but rather by a psychosis, a pathology hinted at but never really revealed. Lorraine Borroughs’ Emilia is quicker to realize what is going on: the way she stares at Iago near the end of Act Four marks the dawning of her understanding; her anger in the final scene almost feels as if it’s directed as much at herself than at Othello or her husband.

Verdict: Not bad. Definitely worth a view, but for me ultimately disappointing. With most of the Shakespeare’s Globe productions, I’ve been blown away, with theirs often one of my favorites for any given play. But while there were great moments, and no performances and weren’t top-notch, this just didn’t surprise and astound me… and that kind of surprised me, and let me down.