In 1995, English actor Oliver Parker made his writing and directorial debut with a version of Othello with Laurence Fishburne in the title role and Kenneth Branagh as Iago. Coming on the heels of his Henry V and Much Ado About Nothing, this marks the first (and only time) that Branagh appeared in a film adaptation of Shakespeare that he didn’t direct himself. 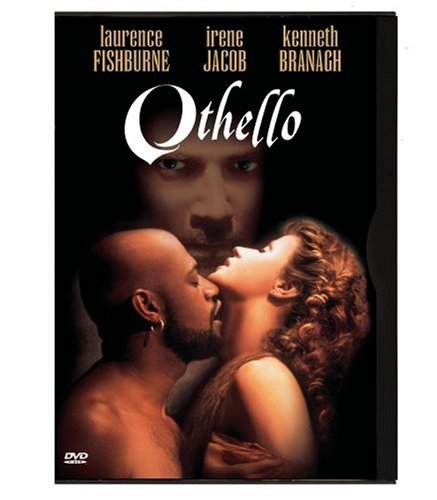 Because this is a film (and not a capture of a stage production), it can be more realistic in its setting, and from the opening shot of the Venice canals at night, we get exactly that. The cinematic element also allows for the camera to do some of the storytelling (like I mentioned in my Macbeth review of last week): we get a flashback to Othello dining with Brabantio (as Othello tells his tale), and a dialogue-less scene of lovemaking between Fishburne’s Moor and Irène Jacob’s Desdemona. And where the camera doesn’t to the heavy lifting, the film editing does: Iago’s turning of Othello in Act Three, is not presented as a single set sequence, but as snippets from different locations… this is very effective. Parker is not afraid to be playful with the script and its editing, as well. The opening of the film gives us the leadership scene of Act One, Scene Three; then we get to usual beginning of the play.

The performances are excellent. Fishburne is strong as usual (though tinged with insecurities); Branagh makes for an excellent Iago. Jacob’s Desdemona is purely innocent (Parker cuts the early Cyprus sequence in which she can show a more worldly, even bawdy side); and Anna Patrick plays Emilia as an almost willing accomplice… almost willing, until she realizes what her husband has done.

Parker does some interesting things with the end of the play. Here, Iago kills Emilia almost as a diversion to allow him to escape. And Iago ultimately succumbs to Othello’s wounding of him, dying on the same bed as Desdemona, Emilia, and Othello.

Verdict: very good. I think this is a better experience than the 1989 version (though Nunn may have had a (slightly) better Iago in McKellen, but I think Fishburne makes for the better Moor); it’s certainly more cinematic. Definitely worth a viewing.