In 1965, while in the midst of a three-year run repertory run at the National Theatre in London, John Dexter’s staging of Othello, with Laurence Olivier in the lead and Frank Finlay as Iago, was filmed by Stuart Burge. You’d think that this full-color film with the greatest living Shakespearean actor would merit a big splashy theatrical release. And you’d be wrong. Instead, it was sent out in “roadshow” fashion, playing in most cities for only two days. 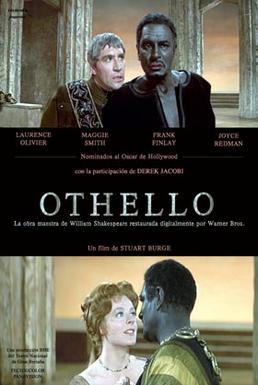 A couple of reviews back, I said that Hopkins hadn’t gone “full minstrel” in his portrayal of the Moor for the BBC, calling it merely “brown-face.” The last one I discussed, the Welles one, was more of “gray-face” given the cinematography. But this one, oh, this one is full-on black-face. Black-face, black-hand, black-arm, black-foot, black-chest. And not just a little black, either. We’re talking deep, dark, black-black, buffed to a sheen. It was ridiculous, but fascinating.

Ridiculous and fascinating, too, were Olivier’s other choices: a slinky swaggering glide to his step, one of supreme confidence, fitting for his experience and rank; yet he’s somewhat gone to seed, a little fat, perfect for his age. And over the course of the performance, that swagger turns to stagger. His voice, too, is different…than anything you’ve ever heard. Seemingly an accent from no nation in the world, Olivier’s Moor is the ultimate outsider. But as wild as these choices are–and not all of them work–he is certainly invested in them, completely committed (and I do mean that in an old-school insane-asylum way).

Just as invested are the performances of the other actors, including a short bull of a man in Frank Finlay’s Iago, and a stunning (and surprisingly curvaceous) Maggie Smith as Desdemona. Both give standout performances, as does Joyce Redman as Emilia. As I noted before, the film never attained a wide release, and while that may have made for less than stellar box office, it certainly didn’t hurt when it came to critics. All four leads won Oscar nominations (though none won).

Verdict: Incredibly watchable. The black face is tough to take, but Olivier’s performance, as wild and committed as it is, is either a work of genius or a trainwreck; regardless, you can’t take your eyes off of it. The other performances, too, along with just its cultural standing, make it–well, if not “must see,” at least–worth watching.