Back in October, I saw a production of Toni Morrison and Peter Sellars’ female-centric reexamination of Othello, Desdemona. As you might recall, I found it white-hot in its brilliance if not a little cold in its emotional heft. Of course, my own gender may be at the root of this; my wife Lisa and our close friend Renee had no problem feeling as much from the piece as thinking of it. 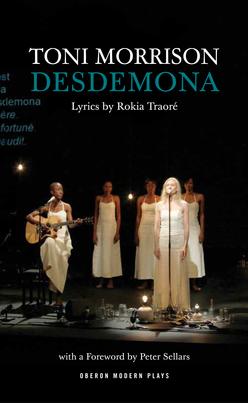 But what do I think about it now, having read the source material again?

Well, I didn’t know what to think (it could be the lingering fog, but I’m not sure). So I got the Morrison/Traore text and went over that again.

And now I do have something to say.

As I read Othello, I feel the need to hear it, to see it, to get it on the stage. As I remember (and re-read) Desdemona, I have the opposite feeling. It feels more like a written work, meant for the page (maybe to be read aloud, given its poetic qualities), but it doesn’t scream to me to be presented on stage.

There are sequences in Desdemona that are so insightful to Othello (or at least to one interpretation of it) that it seems almost integral to the play; of course, there are others that seem so far afield from the play [and not just because they don’t seem to comment on the play, but that they don’t necessarily comment on her]) that I’m not sure of its value to criticism of the play at large.

I’d love to hear what anybody else thinks…