File under: “You snooze, you lose”

After waiting three weeks to see the new Macbeth film (with Michael Fassbender and Marion Cotillard), I found myself in a bit of a fix. As of last weekend, the film was playing in only one theater in southern California, and there only for one matinee showing a day. (and people, it’s gone-gone as of the 31st)… as luck (good luck, that is) would have it, it was playing in Pasadena, where my wife and I like to spend our anniversary. 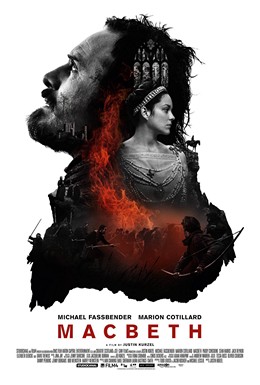 So how was it?

Absolutely beautiful. Stunning (though at times, stark) visuals. At key moments in the film, director Justin Kurzel used filters to make the sky red, blood red. A great effect, though a bit too on-the-nose by the end of the afternoon.

The performances are incredible, particularly in the two leads. Fassbender plays Macbeth as a warrior with growing ambition matched only by his deepening PTSD. Cotillard does nothing to mask her French accent, giving her an outsider’s status, one of increasing isolation until there’s no where else to go but death.

The text is pared down by writers Todd Louiso, Michael Lesslie, and Jacob Koskoff to its core. Kurzel allows for the camera to fill in the blanks of the cuts which is a positive and a negative. For the uninitiated, less text means less to overcome. However, with less dialogue pushing the proceedings forward, it feels like minutes go by between speeches, and gives the film a dragging pace, particularly in the first part of the film.

Kurzel makes some pretty bold directorial choices, most of which pay off very nicely. The film opens with the silent burial of the Macbeth’s (toddler-age?) child, giving weight to Lady Macbeth’s “I have given suck” speech, and a sense of grief and despair to the pair. Interestingly, Macbeth seems to become a father figure to a young soldier in the battle that then occurs, and his grief when the boy is killed seems to kick-start his PTSD.

In the Banquo ghost/banquet scene, the Macduffs leave the dinner early, noticeably, giving Macbeth even more reason to go after the family. And go after them he does. Not only does he have the family killed, but he has them burned alive in front of his followers.

For the movement of Birnam Wood, Kurzel burns the wood, so the movement is via smoke and ash that blows toward Dunsinane. Interesting, but not really effective (though it did give Kurzel another excuse to turn the sky red).

Did I like it? Absolutely. Did I love it? Not really (though there’s a lot to admire in it). Do I recommend it? Yes, definitely… if you can find it. Do rank it up with Throne of Blood? Not even. Polanski’s? Yeah, I think I do. Regardless, it will be a nice comparison piece when we get to the play later in the year.